Over the years, The Power Station has earned a reputation as an artist-driven, cutting-edge contemporary art space. The gallery is housed in a former Dallas Power & Light building in Exposition Park. Exhibiting artists, who are selected on an invitational basis, are free to work inside, outside, on top of and even underneath the century-old building.

However, this expanse of possibilities, combined with the building’s rough, industrial architecture, presents certain challenges. Should artists alter their work to suit the space, change the space in service of the art, or create an entirely new site-specific installation?

New York-based painter Mathew Cerletty fully embraced these uncertainties for his solo exhibition, “Full Length Mirror,” choosing to lean into the gritty interior. The show features 13 paintings and drawings — executed in the artist’s signature hyper-realistic style — that use the space as-is. Most hang directly on the building’s brick walls.

“I was open to the idea that I would get down here and the building would crush my paintings,” he says. “But seeing my tidy work in this space with the crusty walls and various textures actually emphasizes the signage quality of my paintings. They sort of grab onto the building, and their message and volume is turned up.”

Cerletty’s exhibition was initially slated to open in the spring, but the pandemic and months-long closure of The Power Station set it back until late fall.

The artist embraced the opportunity to rework his initial plans, opting to make additional paintings and drawings that allude to ideas of isolation, cleanliness and biological processes. He also became a father while his exhibition was on pause, and his newfound role was a further source of inspiration for his recent works.

Ordinary household objects — an air vent, a bathroom sink, a folding drying rack — become emblematic of the war on germs, while a skeletal model of a female pelvis and a deftly rendered stuffed bunny address childbirth and parenthood.

But Cerletty doesn’t want his personal attachment to, or interest in, these objects to overshadow the objects themselves.

“These are all kind of portraits of you,” he says. “I don’t want you to think about me in relationship to these objects.”

Similarly, Cerletty doesn’t want his technique to be at the forefront of the conversation.

“I don’t want my technique to put spin on an image or have an agenda. If anything, my technique is an attempt to cover my tracks and give the painting autonomy, as if I found it complete,” he explains.

Still, Cerletty’s uncanny technical prowess and deadpan, tongue-in-cheek humor certainly play large roles in his practice, elevating otherwise banal objects and opening them up to a host of possible interpretations. The painstaking methodology at play — the way he is able to capture the shiny metal clasp of a manila envelope, the suppleness of a leather belt, the velvety softness of a tufted ottoman — generates an almost overwhelming sense of lustful covetousness. You want to be fully ensconced by the presence of his works, to wrap them around you like a soft blanket, or unravel them one brushstroke or pencil mark at a time.

It’s this psychology of desire that is a critical factor in Cerletty’s work: the value we place on the things we own, or want to own, and the fact that a depiction of an object can be worth hundreds or thousands of times more than the object itself. The pieces also bring up issues of human labor and worth and the absurdity of consumer culture, from the most benign of objects to highly valued works of art.

In looking at Cerletty’s work, I kept thinking about the phenomenon known as “semantic satiation,” wherein a word or phrase loses meaning as it is repeatedly read or spoken, turning it into an abstraction of its original form. The objects in Cerletty’s paintings and drawings fall under a similar spell — we know what these things are, but staring at them and studying them in such detail disavows them of their intended purpose. Instead, they become something far more powerful and mysterious, meditative relics of a particular world at a particular point in time.

“Mathew Cerletty: Full Length Mirror” runs through March 12 at The Power Station, 3816 Commerce St., Dallas. Open Friday and Saturday from noon to 5 p.m., and by appointment. For details, visit powerstationdallas.com. 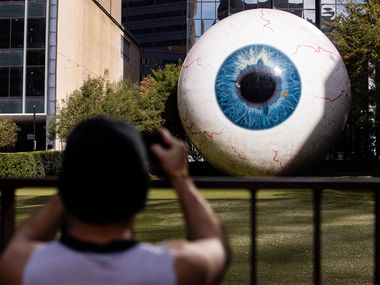 Education
We use cookies on our website to give you the most relevant experience by remembering your preferences and repeat visits. By clicking “Accept All”, you consent to the use of ALL the cookies. However, you may visit "Cookie Settings" to provide a controlled consent.
Cookie SettingsAccept All
Manage consent